A leader in the making 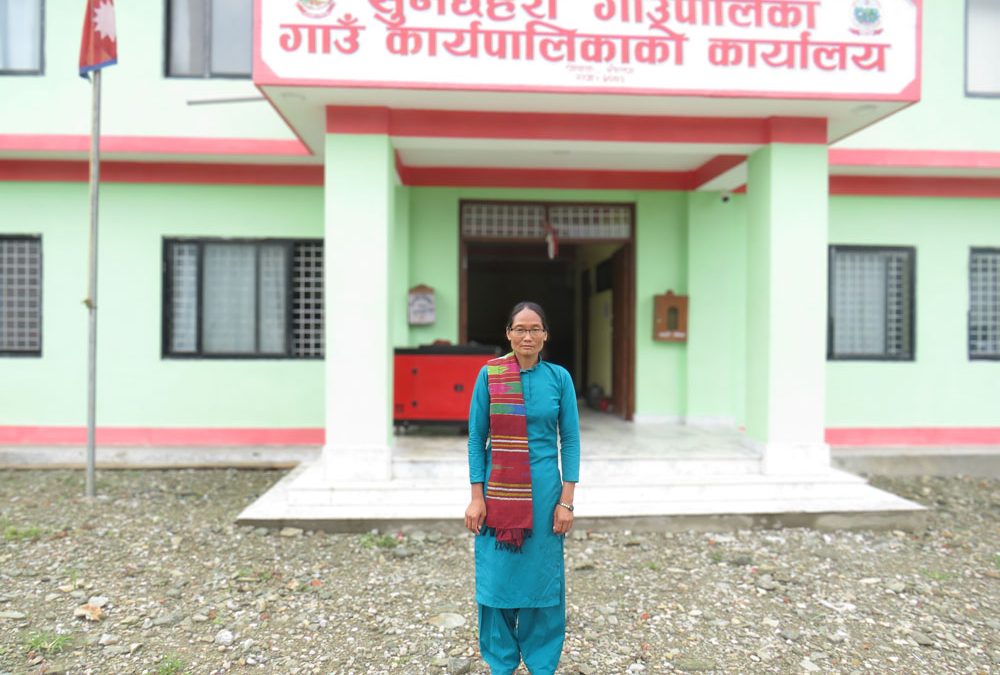 Nankala Magar’s journey from a young widow and former Maoist combatant to a rural municipality’s Vice-Chairperson has been long and difficult.

Nankala is 37 years old and from Sunchhahari Rural Municipality in Rolpa. She lives with her mother-in-law and son. In her family home, Nankala grew up with five siblings; two sisters and three brothers. The family was poor, and none of her brothers and sisters could attend school. There was often not enough food for the family or warm clothes for the children.

“I was too young and ignorant to understand politics and the revolution going on,” Nankala recalls. “I joined the PLA, not by my choice but because I could not stay at home during those times.”

During her stay in the PLA’s camps, Nankala noticed that most of the people she met knew how to read and write. But Nankala had never been to school. She worked hard to improve her literacy, teaching herself to read and write. During the war, she also found love and married a man inside the rebel camp at 18.

“Even after the marriage, we did not get to sit together,” Nankala says. “We were only able to meet occasionally, and I accepted my fate as a combatant.”

A year later, a son was born to Nankala and her husband.

“We had exchanged our vows, accepting that our life was uncertain,” Nankala remembers. “We promised whoever among us survived would raise our child.”

Less than a year after the birth of her son, Nankala’s husband died in the war. The sky, Nankala says, fell on her. Still, she courageously raised her only child, honouring her vow to her husband.

She couldn’t, however, foresee the discrimination she was to face at the hands of her own family.

“My in-laws cursed me, they looked at me with disgust, and I was treated as an untouchable,” Nankala says.

“They thought I was responsible for the death of their only son, so I didn’t get any help from them. I was asked to stay away from home. I took shelter in the cowshed. There was no light or food in the barn. There were no clothes to wear. I spent many days and nights in the forest, crying with frustration. Negative thoughts held me back, but for the sake of my son, I tried my best to make ends meet. Even though I was scolded, I still cared for my in-laws and looked after them. I took them to the health post whenever they felt ill.”

It was only when her son was studying in grade seven that they were invited to live inside the home. As time went by, slowly, things started changing. Nankala had waited patiently for years for the moment her in-laws would accept her. She bore all kinds of pain in her heart yet never left their side through thick and thin.

Then, in 2017, there was a local election. Nankala was asked to contest the position of Ward Member. She agreed, but her mother-in-law was not happy about her decision. She made her feelings known and again blamed Nankala for her son’s death. However, this time Nankala’s father-in-law spoke up to support her.

Nankala went on to win the election as a Ward Member, but soon, things started to unravel. She felt that, even though she had a position, she had no voice to create change.

“I was part of the local structure but could not meaningfully participate. I didn’t know much,” Nankala says. “I didn’t know how to speak well, so speaking on the issues was difficult. Even when I dared to speak out sometimes, they would silence me. I often wondered how I would learn all this, how I could empower myself and how I was supposed to bring change.”

In 2018, INF Nepal implemented the EDUCATE project in Sunchhahari Rural Municipality in Rolpa District. The project created groups of single women, families of people with disabilities, low-income families and disadvantaged groups to help empower them within the community. Nankala became a member of one of the Self Help Groups, taking an active part in the group’s life.

“We were facilitated to identify our problems and find solutions by ourselves. We discussed issues such as sanitation, waste management, and gender-based violence and were provided with training in livelihood-related activities. In the meeting itself, every member had to take turns as Chair. It was a struggle initially, but eventually, all members started to speak out, to lead. We were learning the art of speaking and voicing our issues.”

Nankala took advantage of the unique opportunity through the project’s regular Self Help Group meetings and training. She developed her leadership skills by interacting with group members and the wider community. She began participating in discussions of various social issues that improved her social presence.

“There was no discrimination. Everyone treated me with respect,” Nankala remembers. “During group activities, they encouraged me to speak and give presentations. I felt valued and heard for the first time in my life.”

Nankala was also selected as the Gender Focal Person in her Self-Help Group. She took the lead in identifying and monitoring women’s issues and cases of domestic violence against women in her group. As a part of livelihood support, Nankala also received training and was provided with NPR 20,000 [around AUD 250] from the project for poultry farming.

Nankala’s quest for empowerment started with the training provided by INF Nepal on Sexual and Gender-Based Violence, which imprinted upon her the valuable lesson that “empowerment begins with me.” She had a strong desire not only to strengthen herself but to be the voice of many other women like her.

Reflecting on the abuse and social stigma that she experienced, Nankala says, “My journey has been lonely and full of struggle, but things have now changed for me. I realised that keeping quiet was not an option. We must exercise our voice and share our thoughts to demand positive change. I want to stand for all those women like me through my involvement in groups and as a representative of the ward office.”

The training and exposure not only built Nankala’s confidence but encouraged her to make a positive change. Just as Nankala’s tenure as a Ward Member was about to end, she had a deep sense that she still had much more to do and that this was just the beginning.

Nankala proposed to her party to be nominated for the post of Vice-Chairperson of Sunchhahari Rural Municipality in the local election of 2022. Initially, it was a struggle for her as no one believed in her, but she did not give up.

“I did not hesitate to put forward my proposal,” Nankala says. “The more they said I couldn’t, the stronger I became.”

Nankala contested the position and won! She is now the newly elected Vice-Chairperson of Sunchhahari Rural Municipality. In this role, she will be leading the local Judicial Committee. This is an important and challenging role which seeks to ensure that justice is delivered for everyone in the community. More than simply a legal body, the committee has the right to settle disputes through mediation. Nankala now lives with her mother-in-law and eighteen-year-old son, studying in 12th grade.

“The support provided by INF Nepal for my capacity building has been immense and invaluable to me,” the new leader says with a smile. “I am always grateful to INF Nepal and Bachhapo Self Help Group for bringing positive change in my life. The seed of women’s leadership has been planted in me, and I will ensure our voices are heard at all levels and that people like me are treated with respect and dignity.”

This story is written by Salina Budha Magar, Agriculture Supervisor based in the INF Rolpa branch office.