Celebrating the life of Eileen Lodge

Neither leprosy or stigma, nor the colour of the skin and the nationality terrified or kept Eileen away from being friends to the ones who were outcast and isolated Eileen Lodge a good Samaritan by heart and by her service.

Eileen Lodge, who is best known as the “Iron Lady”, was a British nurse who, along with Betty Bailey, arrived in Nepal in 1953 to work with INF. Both of these ladies had the calling to work among leprosy patients, and together started the leprosy work of the mission.

[1] Eileen Lodge and Betty Bailey started out serving in the INF Shining Hospital, but when the land for the new leprosarium was purchased, Eileen and Betty began helping Hilda Steele supervise the construction of a stone building on the site, using materials from the ruined buildings of the previous government asylum. In 1957, the building was completed, and the first seven leprosy patients were admitted to the new facility. The leprosarium was named “Green Pastures” from the 23rd Psalm, signifying a place of quietness and refreshment, a place for restoration of body and soul. It was a place where the Good Shepherd Himself would heal and nurture those afflicted with this dread disease. And such a place Green Pastures indeed became.

In earlier times, the misery for people with leprosy was not just the disease and deformities but the suffering of isolation and discrimination caused by prejudice. Horrified by what she saw, Eileen was moved to start the leprosy work in INF. It was during her early days in Nepal while serving in Shining Hospital and seeing the plight of the people with leprosy, she decided to fight leprosy and stigma it came with. Eileen with her team not only worked to provide treatment to fight the debilitating disease but also provide all the support people with leprosy needed and show them the dignity they deserved.

Another significant move for rehabilitating former leprosy patients back into society was initiated through sheltered communities. These communities would allow the former leprosy patients to live and work and regain a semblance of normal life. [2] Eileen Lodge was one of the early leaders in establishing such communities. But she was joined after some years by another remarkable woman, Jutta Weber, who following Eileen’s example actually ended up becoming a vital part of such a community herself. Eileen and her team were able to cultivate the hope for people who were shunned and isolated by society. 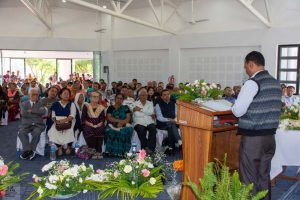 Funeral attendees at the Chapel Hall in GPH

Today, INF Nepal Green Pastures Hospital [GPH] stands on the shoulders of these women and all others who were part of the team and the bigger vision. Eileen’s mission and medical work have expanded over the years and even after more than sixty years, GPH is serving people living with disabilities including people with leprosy in Western Nepal. GPH now features some of the best-equipped facilities in western Nepal, specialising in skin, spinal cord injury and ear diseases.

GPH treats and rehabilitates leprosy patients by providing multi-drug therapy, necessary surgery, counselling, and self-care training. With over sixty years of experience, INF still continues to work for the complete eradication of leprosy from Nepal.

INF expresses deep gratitude for the work of Eileen Lodge and her significant contribution to help combat leprosy and rehabilitate people with leprosy. Today her physical body rests on the ground of Green Pastures Hospital, where she led her first leprosy work. We altogether celebrate her life and INF Nepal is still committed to continuing her incredible legacy.

Some of the major contributions of Eileen Lodge

The funeral service was conducted by Dhaka Ram BM in the newly built Chapel Hall, inside GPH. Her favourite songs and hymns were played during the ceremony by the Choir team.

Pastor Attan Lama prayed for comfort in the beginning. Leaders of INF, NLT and NLF remembered her, how she advocated and cared for leprosy-affected people wherever she went. Jutta Weber, Dr Eliemma John and Peter Bisset all shared their fond memories of Eileen and the lasting impression she had left in their life.

RC Timothy thanked all attendees and Raju Adhikari ended the service with a closing prayer. All the attendees showed their expressions of love to the Iron Lady at the end of the service before taking a short ride to the burial site. Later, selected guests followed the vehicle containing the casket to the burial site for interment. Pastor Grishma Parajuli led the rituals, sharing from the word of God.

The lord is my shepherd, I lack nothing. He makes me lie down in green pastures, He leads me beside quiet waters. Psalm 23:1-2

INF Offices were closed down after the half-day. There were prayers conducted in all other INF Offices.