The earthquake had struck Lamjung district with epicentre at Marshyangdi RM on early Wednesday when the country is battling the coronavirus pandemic.

According to the National Earthquake Monitoring and Research Centre, the tremours were 5.4 and 5.8 Richter Scale in magnitude. The centre said these quakes are the aftershock of the 2015 Gorkha earthquake. The impacts of these quakes were felt as far as Kathmandu and Pokhara.

According to the preliminary report provided by the Ministry of Home Affairs, a total of six people were injured, and 140 households were totally damaged, displacing 38 families. Similarly, two health posts and four schools were damaged. Thankfully no one was killed nor severely injured. The complete assessment of the damage in the district is still being done.

INF Nepal is also in regular contacts with the District Disaster Management Committee, assessing the need and situations for our initial response work. 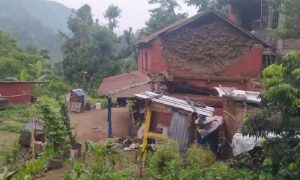