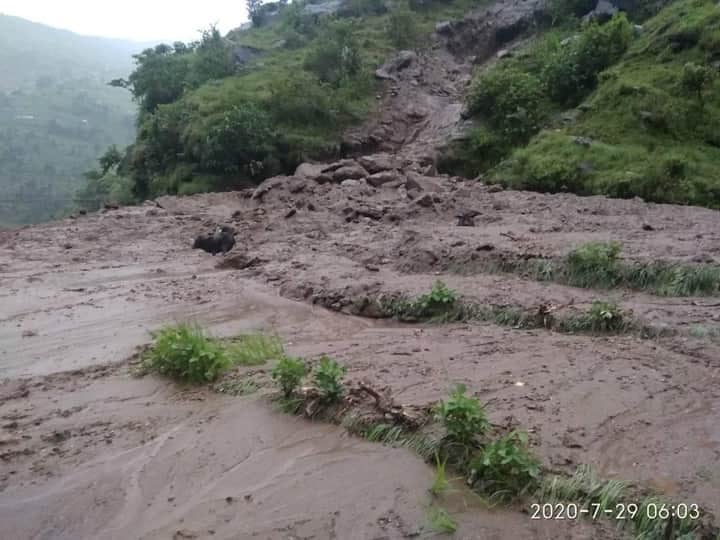 At least nine people including seven from the single-family were killed in Narharinath Rural Municipality [RM] due to the landslides following heavy rainfall on Tuesday night. Among the dead were five women and four men.

A landslide in Baga buried the house which claimed seven lives from the same family. Similarly, another landslide in Gothi swept away a house which killed two on the spot. In Varaata two were injured, and in Khulalu, a 16-year-old boy is still missing. Some of the injured have been rescued by Nepal Army helicopter and taken to Surkhet.

Due to heavy rains, most of the villages of the municipality are at higher risk. Hundreds of families have already been displaced. Narharinath RM is at higher risk of landslides due to its steep terrain, weak topography, traditional houses and lack of safe space.

Narharinath is at 5-6 hours walking distance from the closest point of Karnali highway, which itself is obstructed due to multiple landslides at several sections of the highway. Currently, it is challenging and risky to move from one village to another due to the continuous rainfall and landslides. It is also very difficult to get detailed information about the damage as there is no mobile network in the affected area.

Every year, hilly districts like Kalikot get hit the hardest due to landslides and sees a great loss of life and property. Due to the poor accessibility, it has always been difficult to carry out rescue and medical operation.

Please pray for the deceased and all the impacted by these landslides. Please pray for our staff in Kalikot who are present in the ground assessing the real situation. Please pray for INF as we prepare to provide the much-needed assistance in this difficult time.