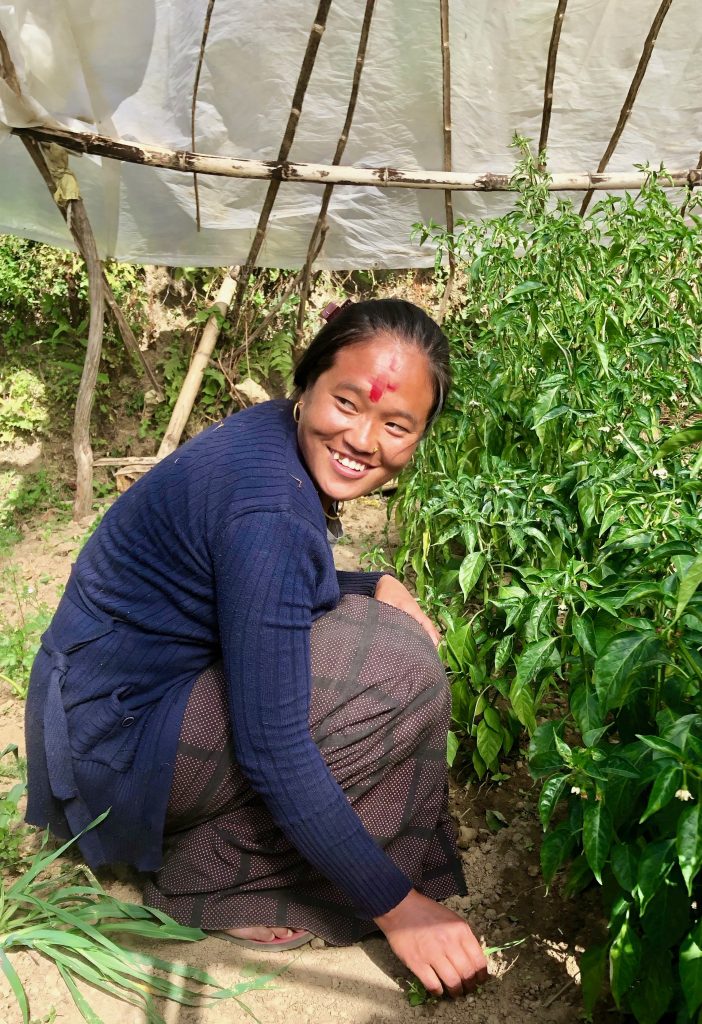 Ram Maya Gharti beams as she crouches inside her “tunnel garden”. She is the first person in Gichhye Village, Rolpa District, that INF has supported with material and training to construct this open greenhouse. Protected from the elements, new crops of cauliflower, tomato, chilli, onion and spinach flourish under the plastic sheeting.

Ram Maya is a member of her village’s newly-formed Self Help Group, which the community has named “Transformation”. Not only a member, she is also the gender focal person for INF’s POWER project* [Promotion of Women’s Empowerment & Rights Targeting Rural Women] which as its name suggests, aims to ensure that INF’s work in rural communities supports the empowerment and dignity of women.

Discussion of gender issues is new for many, and having women speak up at all in some places is still unusual and challenging. When I meet with the Self Help Group in Gichhye Village in a mixed context with strangers present, the discussion of the challenges which women face is brief. But even in a few moments the problems of alcohol and violence are mentioned, as is the pressure on women to bear many male children. “Ek aakha, ke aakha? Ek chhora, ke chhora?” [One eye, what eye? One son, what son?] the expression goes. What is the point, it asks, of having only one son?

Little by little, as she shares with the women of her community and helps them to raise their voices, Ram Maya will help bring change so that women and girls are valued equally with men and boys. Like the garden growing beneath Ram Maya’s plastic tunnel, something new is flourishing. INF plays its small role in helping women and men alike take their place as co-equal image-bearers of the Creator God – “male and female he created them”.

*The POWER project receives support from the Australian Government.