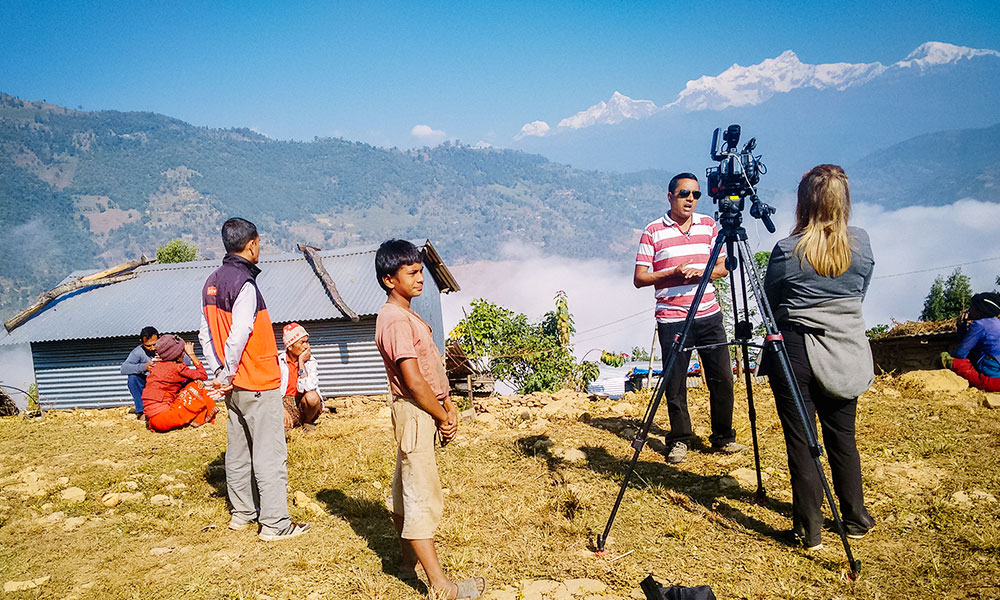 Palliative care is a recent but expanding part of our work in INF. EMMS International, a health care charity based in Edinburgh, Scotland, supports several of our palliative care projects. EMMS is celebrating its 175th anniversary and to mark that occasion, Scottish Television [STV] came to Nepal in November to film a series of reports of work that EMMS is doing in partnership with INF.

First the team visited UMN Tansen Hospital where Manju, who is training to be a specialist palliative care nurse, has been based. Manju has been caring for a number of patients with advanced illnesses and other conditions needing palliative care, as well as teaching staff and exploring how palliative care might be developed at this busy 166 bed mission hospital.

Filming continued in Pokhara where palliative care nurse, Purna Maya, is working at Green Pastures Hospital to provide care in the hospital and the community. The plan is that palliative care will become an important part of the redevelopment of Green Pastures, with a vision for a clinical, training and research centre, particularly focusing on developing palliative care for rural Western Nepal where there are currently no palliative care services.

Finally the team visited Lamjung and Gorkha Districts where the INF palliative care team is conducting a survey of the needs of people with advanced illnesses, severe disability and those who are frail and elderly in preparation for a palliative care training package for health care workers in remote areas of Nepal.

The work INF is undertaking, supported by EMMS, is very much linked to the developing national strategy for palliative care and Susan was able to explore aspects of this with senior colleagues in Kathmandu, putting the programmes she had visited into the national context.

Nurse Manju explains and demonstrates the importance of palliative care with patients at UMN Hospital, Tansen. She has been doing a training placement there over the last three months.

Green Pastures Hospital is providing palliative care to patients like Juna. Although still at an early stage the hospital is planning to become a centre of excellence for palliative care, including training and research, supported by EMMS.

The 2015 earthquakes had a devastating effect on parts of Lamjung and Gorkha Districts. Providing palliative care in remote areas like these is an important aspect of palliative care development nationally in Nepal.