The first-ever fundraising campaign by INF Nepal has seen a good response and support from all corners of the society – from individuals to INF Nepal board members, staff, international supporters to the corporate sector.

As a part of a local fundraising campaign, INF visited some of the corporate organisations based in Pokhara. One such organisation is Sanima Bank Limited, who supported this cause generously with NPR 475,800 [USD 4084].

Dr Ramesh Sharma, Head of Dermatology at Green Pastures Hospital [GPH], highlighted why it is crucial to work together towards Zero Leprosy in Nepal. As Nepal has been out of the priority list soon after the declaration of elimination of leprosy in 2010 by WHO and Nepal’s Government, funding from abroad has shrunk to the lowest that it is becoming challenging to run services. Such a scenario would eventually hamper the patients and people affected by this chronic disease. Dr Ramesh also marked the importance of diagnosing the disease earliest and shared some of the leprosy myths.

Leprosy treatment is not just giving away a pack of medicine, but it demands years of commitment and care from both patients and health care workers. Given the stigma associated with the disease still prevalent in so many parts of the country, it is equally challenging to empower and rehabilitate them back to society.

The programme also saw testimony from a leprosy patient Bibek* Chaudhary [22, Male] from Udaypur district. He contracted the disease at the age of 18 and is still undergoing treatment at GPH. “Before coming to this hospital I have been misdiagnosed many times but coming here brought immense hope in my life. I hope to see myself free from this disease soon.” 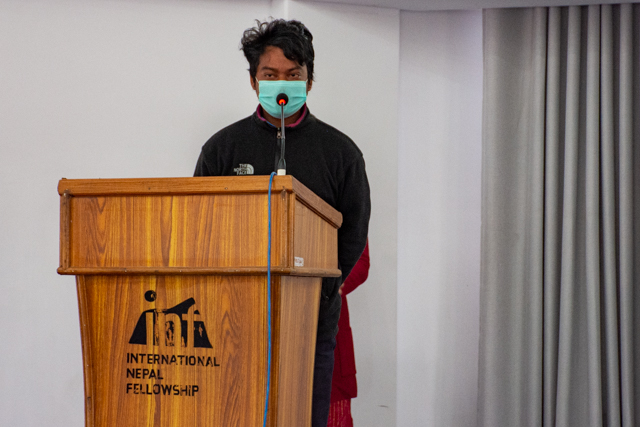 Bibek* – a leprosy patient from Udaypur

The guest of honour Mr Bhabuk Tandukar expressed his gratitude by saying “We are indeed grateful for this opportunity to donate some money from our Corporate Social Responsibility [CSR] fund to INF’s noble cause.” He further added, “INF Nepal and Sanima Bank have been partnering since 2016, and I am looking forward to working together in many years to come.” 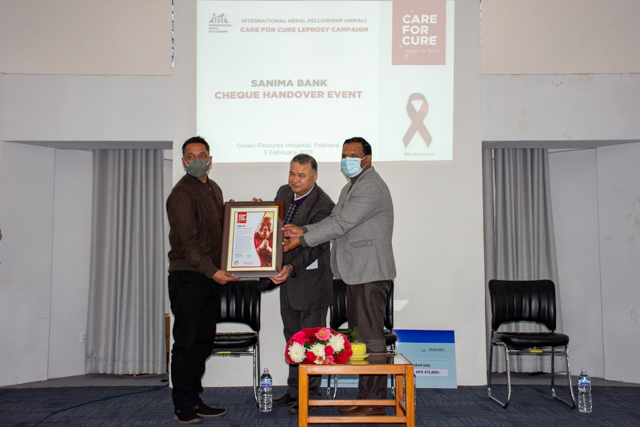 The campaign has collected around 8% of the total target in the last three months since its commencement on 17 November 2020. The campaign will last 18 months until April 2022 and hopes to raise two crore rupees [USD 170,000] by the end of the campaign.

With this fundraising campaign – Care for Cure, INF Nepal aims to care and cure many vulnerable people affected by leprosy. Through three of its hospitals in Pokhara, Banke and Surkhet, INF provides leprosy treatment in a holistic approach.

To learn more about the campaign, please visit www.inf.org/careforcure.