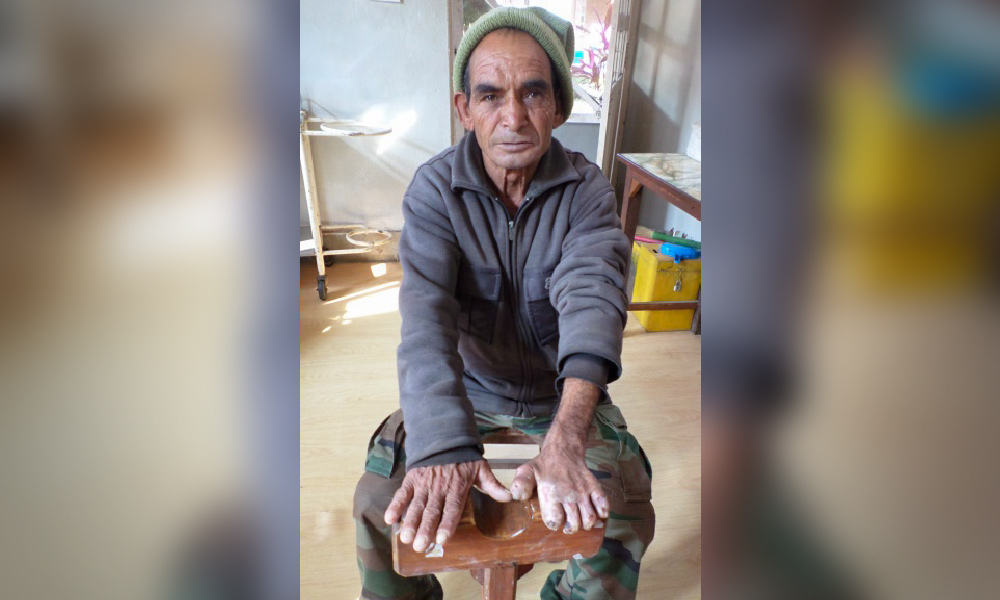 “After spending all my money visiting several pharmacies and hospitals, finally I am in the right place,” says Moti Ram [63, M] as he was preparing for the self-care session in Shining Hospital INF Surkhet [SH-IS]. Moti Ram is from Dailekh district, which is about two hours distance by road from Surkhet. He lives with his wife, four sons and a daughter-in-law.

He came to SH-IS in December 2019 with an ulcer on his left hand. Two years before he had a blister on the big toe of his left foot. The blister went bigger and bigger and caused a big wound. He went to a more specialised hospital for treatment in Nepalgunj, which is about six hours bus ride from his home in Dailekh. As the wound was big, and it touched a bone, he underwent surgery. The doctor told him that he had bone and nerve-related problems asking him to visit the hospital for followup treatment frequently. Because some of the villagers declared that the issue was due to the curse from God, he saw many traditional healers. But despite trying medication from both medical doctors and shaman priests, his condition deteriorated. It was disappointing that even the medical college couldn’t diagnose him with leprosy.

He and his family were worried about his deteriorating health condition. One morning, one of his relatives informed him about the INF hospital in Surkhet and advised him to visit. So without delay, he visited INF’s Shining Hospital, Surkhet. There he was diagnosed with leprosy, and he started Multidrug Therapy [MDT] treatment. Because he had an ulcer on his hand, he was admitted for ulcer care and also received self-care training. Daily dressing, medication and proper rest helped him in healing the wound in a short period.

When he was asked if he was worried about his condition, with a big smile on his face, Moti answered, “Times have changed, it’s not like before. In earlier times, leprosy was neglected by family and society but now people are educated, so their behaviour and view towards leprosy has changed. So why and for what should I be worried?”.

He says that he is happy with whatever life has given to him. It was indeed difficult for him and his family in the last two years, which he doesn’t want to remember. Instead, he wants to focus on his current, much-improved, health condition.

“I’m happy that finally the disease is diagnosed and I hope to be cured. Due to the ulcers, the fingers of my left hand are now short. What I have lost will not return, but now what I have, I don’t want to lose”. 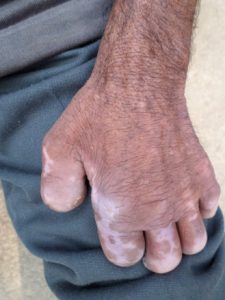