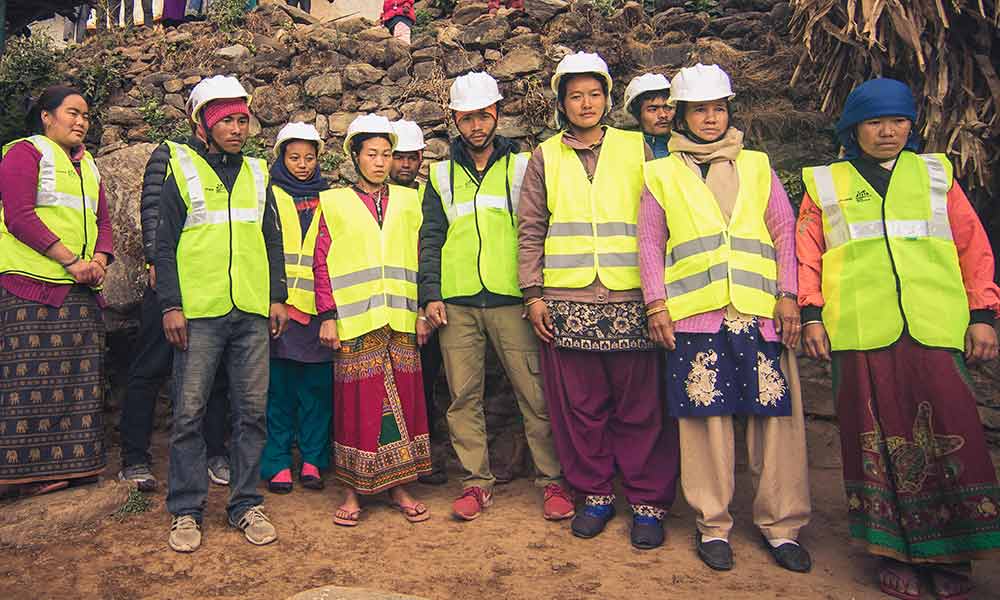 Nepal currently sits among the top 20 countries considered most multi-hazard prone in the world. It is ranked fourth in the world on the climate change vulnerability index.* The­ remote and fragile geography of Nepal’s rural communities, combined with a weak economy, poor infrastructure, low literacy rates and a lack of public awareness, all contribute to climate change and natural disasters to have an even more devastating effect on these communities.

Since its humble beginnings, INF Nepal has been serving the most remote and marginalised communities of Nepal for more than 65 years. It has grown be an organization recognized for its innovative and successful approaches to community development work. Following the devastating earthquake of 2015, INF Nepal formed Disaster Response and Resilience Department [DRRD] and expanded its work to include emergency relief, response work and community resilience programmes. One of its project “Community Resilience Project [CRP]” was implemented in partnership with Terra Tech and Aktion Deutschland Hilft [ADH] in two districts, each prone to different types of disaster.

Rolpa is located in the western middle hills and an average person earns less than one dollar per day. Due to poor infrastructure, it is not uncommon for children to have to spend more than two hours walking to school, or for the nearest hospital to be a two-day hike away. Many homes have no electricity and only a few have running water. On top of this Rolpa is highly vulnerable to landslides and soil erosion.

While Kapilvastu lies on the Terai, the southern flat plain of Nepal with more roads and better access but bears the brunt of flooding. People here are still immersed with traditional beliefs and practices for an instance; flood is perceived by some as a punishment from God. The district is also highly vulnerable to fire and drought; and communities lack the awareness on disaster preparedness and mitigation.

As a result, these communities are largely self-dependent and are very much vulnerable to the effects of disasters which cost not only lives and property but also sets back development gains.

INF Nepal is preparing these communities to be more resilient, developing personal and collective capacity allowing them to better withstand in responding and reducing the vulnerability of disasters in the future. Through this project, INF Nepal supported and facilitated the local government and communities to undertake mitigation and adaptation actions, to plan and prepare for their eventual need to react to disaster events as first responders.

For communities to be first responders, INF Nepal has provided them with various trainings and supported in the formation of Taskforces to enable the communities to undertake light search and rescue, first aid and initiate relief measures to save lives during a disaster event. In order to better equip these communities, INF Nepal has also provided them with required emergency tools and equipment for response work. The taskforces are the local community people; this has now changed their roles from being victims to being first responders. Through this support, the local disaster plans and policies are formed in line with the government plans and policies. Likewise, local disaster management committees and emergency relief funds have been established.

Educating communities about the effects of climate change and the importance of disaster risk reduction has seen communities empowered to implement adaptive measures, reduce vulnerabilities and develop coping mechanisms. Much of this has been achieved through INF Nepal facilitated Self-Help Groups taking ownership of the challenges ahead. Different measures like afforestation, gabioning and Hume pipeline support has been provided by INF Nepal for safer and resilient communities in its working areas.

The communities are picking up the momentum towards improving their own disaster resiliency and the local bodies have shown their interest and are involved in addressing the issues of climate change and disaster management situation.

The attitudinal change in the community people towards disasters preparedness, response and mitigation has been achieved by the project. INF Nepal’s intervention has shown that people can be better prepared and we have seen these ideas being replicated by surrounding communities. The victims of yesterday have become the first responders of tomorrow.